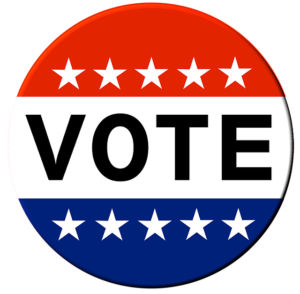 Pennsylvania’s judges and courts are a vital part of our governing system. The courts may seem complicated, but judicial elections are important because they affect the lives of citizens. No matter which party you are affiliated with, selecting the best candidates for office is important because judges have very long terms, 10 years!

In addition to criminal cases, the Pennsylvania court system serves as a decision-maker in a wide range of civil and business issues including, child custody, trusts, foreclosures, bankruptcy, civil lawsuits, local and state governance, and constitutional issues.  Judicial decisions affect laws, government regulations, and their corresponding application in our daily life.

Did you know the Pennsylvania court system has the following levels? 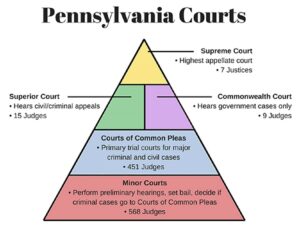 Common Pleas. 451 judges in 60 districts. These are the general trial courts in the Commonwealth.  In addition to criminal cases, the judges handle appeals from minor courts and civil issues relating to families and businesses.

Superior Court. 15 judges working in panels of 3 or 9 judges. Established in 1895, these courts review and hear most of cases appealed from the Courts of Common Pleas.  This includes both civil and criminal cases

Supreme Court. 7 Justices.  The Pennsylvania Supreme court traces its history to before 1700 and is the oldest appellate court in the nation.  This court reviews and accepts discretionary appeals from the Commonwealth and Superior courts and direct appeals from lower courts which involve a death sentence.  The Supreme Court also reviews requests to intervene in lower court’s proceedings and handle individuals detained illegally. In short, the Pennsylvania Supreme court selects cases based on the importance of the issues presented.  Less than 1 in 10 cases are considered.

Learn more about the candidates: